What will be will be… 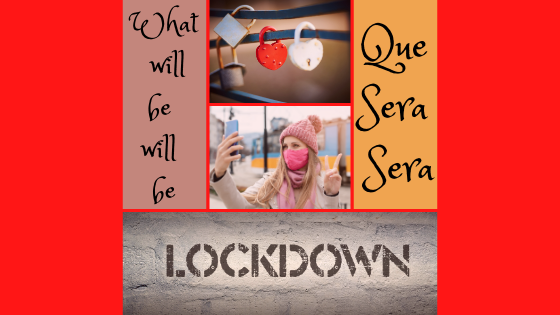 Ok,  so we all know that life as we knew it is probably not going to return for a very long time, if ever at all.

There’s no denying that we are experiencing an unbelievable shit storm of utterly epic proportions and that these unprecedented times are causing people to struggle in all sorts of ways.

What is also apparent is that these weird times have shoved the very best or the very worst of personality traits to the forefront when before they were merely quietly lurking underneath the surface.

I have witnessed some behaviour from people that has truly shocked me,  making me question whether these are the types of people I want to keep in my life.

And I have been touched by those who have shown immense kindness,  thought,  gratitude and caring towards others.

Whichever camp you sit in when it comes to this stuff we are all struggling with a whole tonne of different emotions,  ranging from happy to sad and everything possible in between.  (And that’s in just one day!)

What I think would be really nice though is if people were to stop being so judgemental of each other.

Unless you’ve been living under a rock for the last few months you are going to know exactly what the current guidelines are in respect of what needs to be done and how things are evolving every day.

There’s a lot to be said about using the elusive ‘common sense’ with all this stuff,  it’s not rocket science,   in fact it’s a series of pretty basic steps that everyone should be able to take on board.  Not just for your own sake,  but of those who you live with and the bigger picture,  you know like fixing the world.

We don’t know exactly how individuals are feeling,  so how about doing that thing of actually talking to people,  checking in to see how people are doing?  If we can’t do that in these quite literally ‘bat-shit crazy’ times then when will we ever do it?

Whatever you need to do to get through this is ok,  as long as you are being sensible and not hurting anyone do whatever the hell you need to do in order to manage each day.

If you need a day of doing sweet fuck all in order to get your head in a better place instead of working or being a teacher/parent then do it.

If you simply can’t cope with being on a million video calls to various people then do what one of my friends did and set yourself a time limit for that stuff.

Don’t put unneccessary pressure on yourself by thinking that your home and garden should be in optimum shape just because you suddenly have time on your hands to do the stuff that usually gets pushed aside.

Avoid falling into the comparison trap and thinking that you should have learnt a new skill,  be constantly baking delicious new dishes,  taken a course,  decorated your entire house,  reorganised your wardrobe and cleaned your oven.

Just because that’s how some people are rocking their lockdown it doesn’t mean we all have to do the same.

We hear all the ‘you do you’ stuff all over the place but it’s never held more meaning than at this time.   Taking a step back to re-evaluate things in your life rather than trying to pack loads into it could actually be the very best thing you could do for yourself right now.

However you feel is ok.

Whatever you do is ok.

We all ‘do’ life differently in normal circumstances,  so we are sure as hell all going to be doing things differently right now!

And that is ok too!

Just because you want to send your kids back to school and your friends don’t,  it doesn’t matter.  Decide what is right for you and don’t let others berate you if your opinions differ.

This shit really does not matter.

What matters is that we get through this the best we can and we make the decisions that are right for the people in our own little bubbles.

The huge #bekind motto which swarmed the nation just a short while ago has been forgotten in the blink of an eye.   It’s as if you can only #bekind if someone has the exact same viewpoint as you on totally everything.

Complaints about things which don’t really matter in the grand scheme of things seem to have taken a sharp rise as if suddenly those with time on their hands need something to moan about to fill their days.

Everyone really just needs to chill the fuck out.   We can’t control anything other than what goes on in our own lives,  being judgey,  comparing,  anxious and stressed is not going to help anyone,  least of all you.

What will be will be…

We’ve been hearing the old classics such as ‘We’ll Meet Again’ and ‘You’ll Never Walk Alone’  but how about a little blast from the past in the form of Doris Day ‘Que Sera Sera’ because what will be will be.

Breath,  listen to some music,  dance,  smile and tell yourself that no matter what happens this won’t last forever,  things will come good in time and until then use your energy for what’s important.

Whatever Will Be, Will Be (Que Sera, Sera)