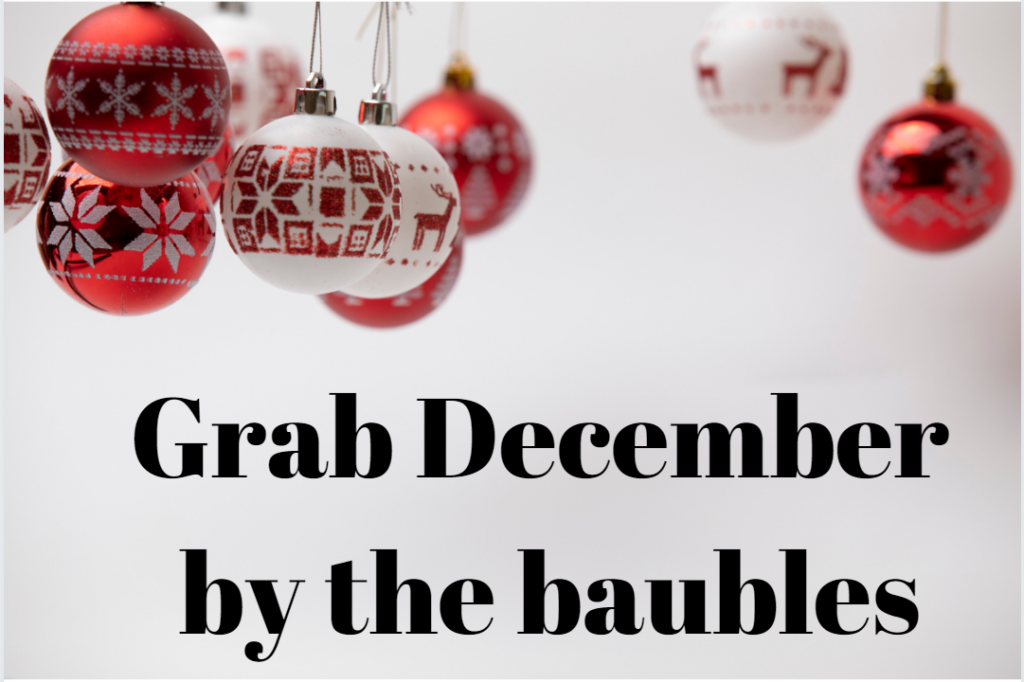 It’s midday on the last Saturday before Christmas and I am sat in the Accident & Emergency department of my local hospital facing a two to three hour wait to be seen.

I was doing some housework in my next door neighbours house while they were away for a few days and managed to epically stack it down some concrete steps smashing the side of my foot with quite some force! Nothing I do is very ladylike and let me tell you this was no exception!  As I lay on the floor screaming,  yes a full on wail, I couldn’t believe that this had happened, I thought my ‘December curse’ had been broken!

Every year, the same week in December has been blighted with unexpected problems, having made it this far through the month I had been lulled into a false sense of security that this year would be different.  Having had a pretty shit 2019 as far as health and finances go I was certain that a decent December was mine for the taking.

Let me give you a little idea of what the previous years Decembers have looked like.

Two weeks before Christmas I became quite poorly quite quickly;  I actually thought I was having a heart attack as the chest pain which I experienced was nothing like I had felt before.  My amazing small people called an ambulance in the middle of the night and I spent the next week in hospital.  Turns out that some of those pesky little gallstones had decided to take up residence in my body and were causing all sorts of problems and getting stuck in tubes where they shouldn’t be.  An operation to get rid of the offending gall bladder and its inhabitants took place and I was lucky enough to be given large amounts of morphine (bloody lovely stuff).  Christmas was managed entirely through online shopping and I just about managed to cook up a feast for us on Christmas Day and get all the cleaning up done before numbing the pain with copious amounts of festive booze with my lovely neighbours.

December 2017 involved no visits to a hospital (nothing short of a miracle in my life!)  However it did bring a totally different drama.  It was very cold, the weather has just turned and temperatures had dropped to below freezing.  My boiler then decided that it would be the most opportune moment to stop working.  Now I don’t mean just have a little moan and grumble, jiggle a few bits around, press a few buttons and you’re ready to rock kind of not working.  I mean the totally knackered, two of the main components (can’t remember what) had completely died kind of not working.  My boiler was beyond repair, kapput, nothing could fix it.  I had the very night before, while sat in my lovely warm home done all of my christmas shopping, all my money was gone.  There was definitely nothing left for a whole new boiler,  fitting and all the expense that that brings.

Rolling back to the very same week in December 2016 and it was incarceration in the local hospital with my daughter who was at the time very poorly.   She suffers from a rare, chronic health condition and as it reached a crescendo causing months of endless suffering we ended up in hospital while they tried to figure out why she was so poorly.  It was a worrying time, none of the medications worked and we were discharged with mixed feelings as although pleased to be going home, my little lady was no better after a week spent on the ward.

As a lone parent I always worry that I am not giving my children a very good Christmas, it’s a quiet affair with just the three of us, it’s not very lavish as my funds are not limitless.  With the dramas of December which seem to afflict us it always seems like I am fighting a losing battle when it comes to giving my offspring a fantastic Christmas.  The pressure I put on myself is immense, the stress I load upon my shoulders in a bid to create the perfect day, The ‘should have’ ‘could have’  ‘would have’ tirade which constantly screams through my brain at a million miles an hour while I berate myself for all I haven’t done, or thought about but never got round to doing.

Why the hell do I do it to myself?  What am I trying to prove? And to who? Santa?

With the added unexpected occurrences which seem to be hurled like huge great boulders from a great height in the weeks before Christmas why do I then try to make life more difficult for myself by attempting to go all out for one day, just one day!

We all have such great expectations for Christmas Day, and tend to be bitterly disappointed when our kids don’t like their presents, we forgot to put the Turkey in the oven on time, our vegetables aren’t prepped, the house isn’t spotless, there’s a family argument,  whatever it is that is your particular issue.  We big up this one day over all the other hundreds in a year when in reality there are probably far more days which have the potential to be special to us as individuals which are much more important.  An anniversary, a birthday, a new job, a retirement, a birth.  Apparently Christmas is the one day in the year where we all get incredibly fraught striving for the seemingly impossible perfect day.

As my disastrous Decembers have proved, it really doesn’t matter about any of the stuff that we get ourselves in such a state about.  At this moment in time I can’t drive due to my busted foot (which is incredibly swollen and a rather interesting colour) I haven’t done a food shop yet, we have no Turkey or trimmings and I don’t know when or how I will even attempt this mission whilst hobbling around on crutches.

What I do know is that it will come together in some way over the next forty-eight hours and my children and I will not starve.

What I also know is that each year when the avalanche of December shit descends I am incredibly lucky to have amazing friends around me who are there to support me.  A friend who took my broken self to A&E and picked me up again, a friend who leant me the money I needed to buy a new boiler and have it fitted so my children and I didn’t freeze,  a friend who drove four hours to get me a trade price boiler, friends who let us use their showers and spend time in their warm homes, a friend who brought new pyjamas to my daughter in hospital when she had nothing clean left to wear.

No matter what is going on for you this month, please just do yourself a favour and give yourself a break!

No one is going to look back in years to come with scolding memories of you forgetting the dessert, not having enough brandy butter or falling asleep after dinner.  Someone may well remember you for being a grumpy arsed git who was stressing, shouting, swearing and generally losing their shit because everything wasn’t ‘done’.

Things haven’t gone to plan, again, but to be honest as long as I see my small people smile, hear them laugh and can feed them something, I’m not bothered that all the jobs won’t be done, that I don’t have enough money to buy many presents, that we don’t even have a Christmas tree because my home is just too small (we actually have some decorative twigs from my neighbour which my daughter decorated with old tinsel, lights and baubles).

I urge each and everyone of you to embrace the ‘Fuck it, it’s Christmas’ mantra which we happily adopt throughout all of December, take it by its baubles and completely and utterly live by it on Christmas Day over and above all other days!

If you want to stay in bed in your pjs and feast on Quality Street and Baileys then do it!  If you don’t want to spend your precious few days off of work spending time with toxic people who leave you feeling miserable, then don’t do it!  Do not stress over inconsequential shit that just does not matter and do what makes you happy!

I’m sure if more people focused on this one small,  but hugely overlooked and important element of Christmas there would be far more fun to be had.

Start practising now, say it out loud and be proud ‘Fuck It, it’s Christmas, and I shall do whatever the hell I like!’

Relax, chill, party,  eat, drink, be with people, be on your own, but whatever you do, own that shit and be gloriously happy and stress free!